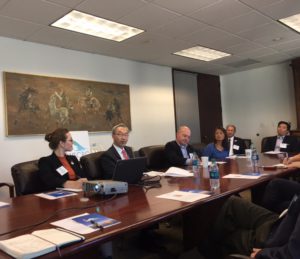 On September 28, 2017, WSCRC convened this month’s second session of the Policy Briefing Series – the seventh session since the Series’ launch in April – at US Bank in Seattle.  Vincent Yao, Director General of the Taipei Economic and Cultural Office in Seattle, discussed Taiwan trade relations and prospects for Washington state.

Mr. Yao assumed the office of TECO Seattle’s Direct General in 2016 and has been impressed with Washington’s wealth of strategic industries. Washington is one of Taiwan’s most valued trade partners, making up 7.2% of all two-way trade traffic between the US and Taiwan.  Taiwan is Washington’s 7th largest export market and 5th largest import source, and Taiwan is the destination for 4% of all Washington exports.

Taiwan boasts a central location in the Asia-Pacific region and well-developed industrial clusters—assets which it has strategically leveraged to establish itself both as a leading US trade partner and a key player in the Asian-Pacific supply and production chain. Furthermore, Taiwan has intentionally focused its efforts in major innovative industries such as aerospace, cloud computing, and smart machinery, to enhance its globally competitive edge. Mr. Yao noted that Taiwan’s current growth in healthcare, biotechnology, and renewable energy could also pose investment prospects for Washington. TECO Seattle also aims to attract more Washington industries to the numerous world class trade shows hosted in Taiwan each year to boost international exposure.

An extremely trade-dependent economy, Taiwan is open and flexible in terms of trade and investment. Mr. Yao believes that Taiwan and Washington’s industries complement each other well. “We attach great importance to this bilateral trade partnership,” Mr. Yao explained, making it clear that TECO endeavors to maximize trade relations and partnerships across industries. Investment is traveling both directions, and the Director General invited interested companies to “give him a call,” to discover the benefits of deepened and expanded trade relations between Taiwan and Washington.