Robert Hamilton emphasized the importance of properly understanding and interpreting trade data when assessing the potential impacts of the current dispute on Washington’s economy. Several major exports included in China’s tariff list are inaccurately credited to Washington, such as soybeans (grown in the Midwest and only consolidated in Washington) and passenger vehicles. Correcting for these anomalies, an estimated $800 million in Washington state goods are directly subject to Chinese tariffs invoked within the last year, including wheat, cherries, and other agriculture products and processed foods. It should be noted, however, that at the time of this presentation these estimates were based on the most recent list of enacted tariffs, and thus exclude the latest round implemented on September 24. He also highlighted the intense efforts, over many years, to develop an export market in China for Washington state agricultural products; these markets could be irrevocably harmed by a prolonged trade war.

Although China, as a net exporter with the U.S., has less imports to apply tariffs to, Mr. Hamilton pointed to several non-tariff retaliatory actions available to the Chinese government with deleterious impacts on Washington. These include challenging Washington state solar subsidy programs at the WTO and restricting the export of important manufacturing inputs, such as polysilicon used by REC Silicon operations in Moses Lake.

According to Mr. Batson, Trump Administration objectives are to impose enough pain through tariffs to force China to change its current industrial and market access policies. However, it remains unclear how much pain China is able or willing to endure. Indicators on the impact of the trade conflict on the Chinese economy are mixed. Unlike in the U.S., the Chinese stock market has been down this year, but property markets have remained strong. The RMB has also depreciated 5% since the start of the year (and 8% from a recent high vis-à-vis the U.S. dollar), helping to partially offset the impact of tariffs. Moreover, China’s exports have been decelerating for quite a while, well in advance of U.S. tariffs, making it difficult to separate the effect of U.S. tariffs from broader structural shifts preceding the current dispute.

Longer term, it remains unclear what the Trump Administration’s exit strategy. The invocation of Section 301 of the 1974 Trade Act was intended to be used in unique circumstances to impose penalties on trade partners with most-favored-nation (MFN) status. When China ascended the WTO in 2001, it concomitantly gained MFN status on a permanent basis with the U.S., thereby removing U.S. leverage to review and potentially deny renewal of MFN status on an annual basis. The Trump Administration’s usage of Section 301 is interpreted by some to represent an effort to undermine China’s MFN status. 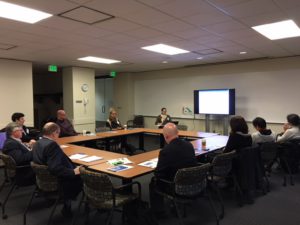