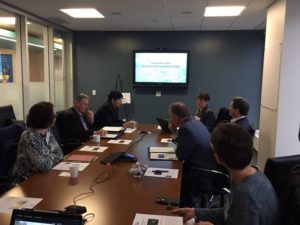 When asked what would happen if the US decides to circumvent rules in the WTO and exercise American sovereignty, Ambassador Hills replied, “If we tear up the WTO, we would be out in the jungle! The law of the jungle would preside. Our average tariffs are two percent. Some countries we trade with put 50 percent tariffs on US products. If we did not have WTO rules to protect us, then they would retaliate, and we would counter. We would be in a very bad situation with trade wars brewing, and the economy would be a mess.”

Brian Bonlender, Director of the Washington State Department of Commerce, underscored that WSCRC is critical in these times of uncertainty in US-China relations. Since the United States entered WTO 20 years ago, now is a good time to review and improve our work around trade with China – intellectual property protection, state run companies are subject to regulations of private, environmental protection, and personal data protection.  Governor Jay Inslee has lifted the travel ban, drastically ramping up business development work for the state. Department of Commerce will be in 10 different countries around the world, and will implement international attraction and trade promotion plan. Washington state has led the country in export program. 71 opportunities and 6,000 jobs in business development.  Governor Jay Inslee is planning a visit to China in August. The Commerce Department in collaboration with the Chinese Ministry of Commerce are planning an inbound investment forum in fall 2017 in Seattle.

Yang Yihang, Economic and Commercial Counselor, People’s Republic of China Consulate General in San Francisco noted that in the past 30 years, economic relations between China and the United States have developed rapidly. In 2013, bilateral trade reached USD 519 billion – 207 times the volume of 1979. China has become the US’s biggest trade partner. In 2017, Chinese company’s direct investment in the US had increased 132 percent to USD 19.5 billion. US companies’ investment in China grew by 52 percent. Companies from both sides are optimistic. Counselor Yang emphasized that China – Washington economic relations are unique. In 2016, trade between China and Washington state reached USD 20 billion. In exports to China, Washington ranks first among US states. He affirmed that it is mutually beneficial for two sides to cooperate, and Washington state is leading the way.

WSCRC also honored Robert A. Kapp with the Sidney Rittenberg Award for unique leadership in advancing US-China relations. Stanley Barer, co-founder of WSCRC, presented the Sidney Award to Bob Kapp for his service as WSCRC executive director from 1979-1987 and 1992-1994.