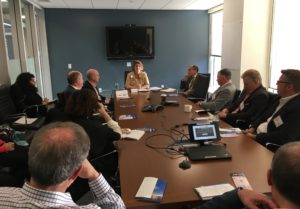 On October 16, 2017, WSCRC joined the AJC Asia Pacific Institute to welcome Dr. Samantha Ravich to an invitation-only discussion on cybersecurity at WSCRC in Seattle. Dr. Ravich, Principal Investigator for the Project on Cyber-Enabled Economic Warfare and former Deputy National Security Advisor in the Office of Vice President Cheney, shared her perspectives on growing security challenges of cyber-enabled economic warfare.

Based on extensive knowledge and experience in the field, Dr. Ravich elucidated the multi-dimensional nature of the motives behind cyber-attacks and the relationship between the US economic and military strength. Dr. Ravich detailed how cyber-attacks pose an imminent danger to critical US industries including banking, infrastructure, intellectual property, and intelligence, which underpin the economy and fund US powerful military.

While the US and China are often seen as being at odds in the terms of cybersecurity, Dr. Ravich pointed out that in fact it is in the best interest of both parties to work together on this front, especially in consideration of the interdependence of the two economies. Additionally, Dr. Ravich discussed the potential role that Israel, a global leader in cybersecurity, could play as the third corner of the US-China-Israel triangle, in leading the conversation on cybersecurity and attacks and defining global security norms.

Special thanks to the AJC for co-organizing with WSCRC and to Dr. Samantha Ravich for participating in this informative, invite-only briefing.

Mercy A. Kuo is President and Executive Director of the Washington State China Relations Council in Seattle. This piece is part of a special RCW series on the U.S.-China geopolitical relationship. The views expressed here are the author’s own.

This article was originally published in RealClearWorld on May 8, 2017.

Managing U.S.-China relations is no longer the reserve of foreign policy elites in Washington, DC. For governors, mayors, county executives, and business leaders in U.S. states, cities, counties, and regions, China is a ubiquitous player in the economic development of myriad sectors. Its presence is felt across the country: from innovation incubators in Seattle and Silicon Valley, food processing in Iowa, automotive parts manufacturing in Michigan, and oil and gas development in Texas and Oklahoma, to high-tech manufacturing in Massachusetts and real estate investment in New York. How are public and private sector decision-makers on the subnational level crafting their China strategies?

States bring consequential voices to the national dialogue on U.S.-China trade relations and, more broadly, on the future direction of cooperation and competition between the two countries. Whether attracting Chinese foreign direct investment or ramping up exports to China, state-level government and non-governmental organizations understand that trade with China is a critical factor in facilitating job creation and capital investment, but they also must navigate uncertainty in U.S. trade policy reforms. According to a report released last month by the National Committee on U.S.-China Relations and Rhodium Group:

“A detailed stocktaking of local impacts is more urgent now than ever before. An unprecedented Chinese investment jump in the US from $15 billion to $46 billion in 2016 has spurred a number of initiatives to alter the US inward investment screening regime, to address security and economic concerns. As proposals for policy reform surface, members of Congress will have to balance legitimate concerns against the goal of America’s open investment tradition, as well as the many economic benefits foreign investment brings to the United States.”

“We expect nearly 35% of the population, or around 480m consumers, to meet our definitions of upper middle-income and high-income by 2030. That represents a sharp increase on the 10% (132m) at present. The emergence of this large population, with a personal disposable income of at least US$10,000, will alter the consumer landscape in China,” noted a 2016 report by the Economist Intelligence Unit.

The number of Chinese dollar millionaires is expected to reach 2.3 million by 2020, a 74 percent increase compared to today, according to the Credit Suisse Global Wealth Report 2015.

With regard to meat products, China has witnessed an astronomical increase in consumption, from a mere 7 million tons in 1975 to 75 million tons last year. China now consumes roughly 50 kilograms of meat per capita. This, combined with its massive population of 1.4 billion people, has made China the largest consumer of meat in the world, based on a 2016 Food Security report by the Center for International Strategic Studies.

At approximately $630 billion of sales in 2015, China’s online retail market is the world’s largest, nearly 80 percent bigger than that of the United States, which it overtook some two years ago. E-commerce in China accounts for 13.5 percent of all retail spending, a higher share than that of all large economies but the United Kingdom, encapsulated in McKinsey & Company’s 2016 e-commerce survey.

Business and government leaders at the subnational level are well-served to identify which trends could most affect their organizations’ growth strategies, and to be mindful that transactions in national-security sectors may fall under the purview of the Committee for Foreign Direct Investment in the United States (CFIUS). Limited access to Chinese markets for foreign direct investment fosters an asymmetry in bilateral trade relations, and FDI remains a bellwether of where negotiations on the Bilateral Investment Treaty (BIT) are headed — another facet of U.S. states’ China strategy.

A perennial question for U.S. policymakers and military planners is what China’s growing power and influence portend for America’s national security interests. Geopolitical risks in traditional and non-traditional security spheres can cause global and national disruptions. How are subnational players preparing contingency plans in the face of potential military or cybersecurity conflicts in the Korean Peninsula or in the South China Sea? How are they planning for a possible trade war between Beijing and Washington?

With Washington, California, and Oregon in the top five U.S. state exporters to China — first, second, and fifth respectively — geopolitical threats could impact seaport operations, telecommunications, financial systems, transportation, and infrastructure, among other things. Factoring the scope and scale of such disruptions into a China strategy could help enterprises better mitigate operational risks. Case in point, China’s cybersecurity law, which goes into effect on June 1, has far-reaching implications for cross-border data transfers. The law claims China’s “cyber sovereignty” — an extension of China’s cyberpower strategy — that seeks to protect personal information and critical information infrastructure. For foreign cloud computing businesses and companies with servers in China that contain volumes of customer information, the global rules of engagement in cyberspace are rapidly evolving. An inability to adapt could expose vulnerabilities in companies’ data management systems, and this could adversely affect millions of customers. As Alibaba Chairman Jack Ma recently warned, “Society should prepare for decades of pain as the internet disrupts the economy. Social conflicts in the next three decades will have an impact on all sorts of industries and walks of life.”

Mind the Message: Facts, Not Fiction

Articulating U.S.-China trade linkages across national and economic interests is fundamental in developing a China strategy. Connecting the dots of global trade is essential. This means, for instance, identifying how the global supply chain not only affects multinational corporations, but also small and local businesses in your community.

In a March 2017 keynote address to the Washington State China Relations Council in Seattle, Ambassador Carla A. Hills, former U.S. trade representative and lead negotiator of the North American Free Trade Agreement, stressed the importance of educating the public on globalization and free trade:

“Explain the trade facts to the public, so the public can judge based on fact, not fiction. Most Americans don’t know 80 percent of our trade is through global supply chains. Twenty years ago, East Asia had about two-thirds of our deficit. Today, China has become the major player in the East Asia supply chain. Sixty percent of U.S. imports are intermediate goods that make our exports globally competitive.”

The South ranks first among all regions, hosting over $29 billion of Chinese investment. It is home to some of the largest Chinese-owned companies, as well as capital-intensive investments in the energy sector and smaller greenfield investments in manufacturing. Chinese establishments provide more than 52,600 jobs in the South, roughly 37 percent of the national total, with beneficiaries including North Carolina, Kentucky, Virginia, Georgia, Alabama, and Texas.

Although some U.S. manufacturing jobs have been lost because of the trade deficit, several American firms sell high-value products to China, including cars and trucks, construction equipment, and semiconductors — and this supports jobs. These firms export business and financial services that totaled $6.7 billion in 2014 and $7.1 billion in 2015. By 2030, analysts expect U.S. exports to China to rise to more than $520 billion, according to a recent US-China Business Council report.

On a subnational level, the message and messengers of a China strategy can also help shape perceptions and attitudes of Americans and Chinese toward each other — a key element in people-to-people diplomacy. Only 38 percent of Americans view China favorably, while 44 percent of Chinese hold positive perceptions of Americans — an indicator of mutual misunderstanding and mistrust.

U.S. states, which benefit from Chinese cross-border investment and trade, are well positioned to improve American perceptions of the Chinese, and in turn to provide a much-needed boost to the broader geopolitical relationship between the two nations.

Nelson Dong presented a comprehensive background on the role and scope of Chinese industrial espionage in the United States, civil and criminal enforcement tools of US government investigators and prosecutors, US customs and border protection (CBP) policy.