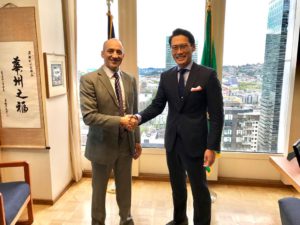 On September 19, 2017, WSCRC convened the Policy Briefing Series at K&L Gates in Seattle. Nien Su, Chief Economic Advisor in the US House of Representatives, shared his perspective on US trade relations with Asian countries. With a unique and extensive background of business development and government policy, Mr. Su provided timely observations on uncertainty in the current global trade climate and suggestions for ways in which Washington state could spotlight its resources and assets. Based on his experience with trade and economic growth in his district in Southern California, Nien Su emphasized the unlimited growth potential of three key areas: food, cars and technology. These three sectors are fundamentals that will continue to help create jobs despite global market uncertainties. The main message of Mr. Su’s district in Southern California is that they are “open for business” and welcome investment from Asian countries.

Mr. Su was impressed with the leadership of Washington state companies in the global trade arena.  He met with government leaders at WA Commerce Department and Snohomish County, and leading companies, including Boeing, PACCAR and Amazon, which represent just a sampling of the wide array of the state’s globally competitive industries.  He noted that despite national political rhetoric on global trade issues, US states, counties and cities are well-positioned to strengthen US trade relations with Asian nations.

Nien Su concluded with recommendations of achievable steps towards increasing Washington state’s access to Asia’s market. Agricultural and service exports often fall outside the zone of major controversy within trade policy debates, creating tremendous growth potential for Washington’s rich agricultural assets and services in direct trade with Asia. Additionally, he underscored the importance of stepping up US e-commerce presence in China, streamlining procedures for agriculture exports, and providing more direct flights to major Asian hubs as short-term goals. Mr. Su opined that Washington sits atop a “goldmine” of trade and services potential within Asia, and now is the time to showcase Washington’s natural resources and assets for the Asian market.