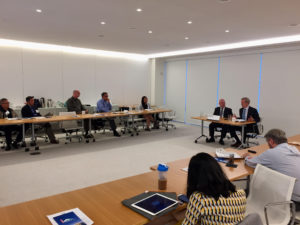 On September 19, 2018, WSCRC welcomed Ambassador Rufus Yerxa as presenter at the Policy Briefing Series. Currently the President of the National Foreign Trade Council, Ambassador Yerxa has more than three decades of experience as a lawyer, diplomat, trade negotiator, and international officials. He oversaw policymaking in Congress, the Office of the United States Trade Representative (USTR), and the World Trade Organization (WTO).

Ambassador Yerxa emphasized the importance of maintaining involvement in the multilateral trading system, despite recent tariffs leveraged between the US and China. He detailed how trade was critical to America’s economic vitality, as it fuels economic growth, supports employment, and facilitates the import of affordable goods and services. Speaking specifically about trade with China, Ambassador Yerxa noted that economic ties with China overall were important to preserve, even if there have been past disagreements over currency manipulation and economic nationalism.

Speaking about the WTO, he noted that the organization was necessary because it underpins global trade between many of the world’s nations. Considering the trade conflict between the US and China, the rules of the WTO may face renegotiation. However, Ambassador Yerxa commented that that the WTO’s success in boosting trade among its members and reducing export volatility should remain hallmarks of the global trading system in the future. Citing historical examples of South Korea and Mexico in the late twentieth century, he illustrated how previous protectionist policies did not remain permanent fixtures of a nation’s economy.

Special thanks to WSCRC Board Member Annamarie Larson and K&L Gates for hosting and providing light refreshments. WSCRC was pleased to welcome audience members from K&L Gates’ Portland office via telecast for this session of the Policy Briefing Series.