The masks were delivered this week to the City of Seattle’s warehouse. They will be dispatched to the City’s first responders and social service providers to ensure their safety while providing urgent care.

These results come from multi-year outreach efforts by the Washington State China Relations Council (WSCRC) and the City of Seattle. In May 2016, the WSCRC helped to organize and lead a weeklong business mission to China that resulted in nine major agreements and investments between the City of Seattle and the City of Shenzhen. The WSCRC signed an agreement with the Shenzhen Foundation for International Exchange and Cooperation to enhance strategic relationships and promote non-governmental cooperation between Shenzhen and Seattle. Over the years, the City and WSCRC have also hosted a number of delegations from Shenzhen. Shenzhen is also the home to BGI, one of the world’s largest genome sequencing companies. BGI has been working in partnership with Seattle institutions for years on global health initiatives, including on the current COVID-19 response, and maintains a team in Seattle. 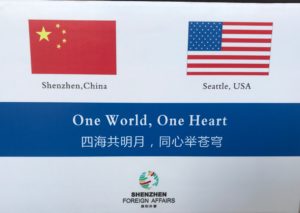 Mayor Durkan expressed the City’s appreciation to the City of Shenzhen and looked forward to opportunities to build stronger ties between the two cities. The Mayor also commended the Washington State China Relations Council for its efforts to foster this important relationship over the years.

The WSCRF has accepted a donation of 200,000 surgical masks from Tsinghua University Education Foundation and is expecting that shipment to arrive in Seattle in the next week or two. These masks will be transferred to the State of Washington.