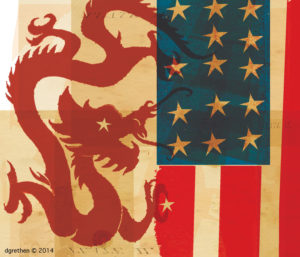 4 Steps for Trump Administration to Resolve the China Trade War

The future of U.S.-China relations is critical to the economic well-being of Washington state. China is our state’s most important export destination, source of investment, and trade and commercial partner. The members of the Washington State China Relations Council are deeply concerned with many of the issues and grievances underpinning the current impasse between our two countries. However, we fundamentally disagree with the approaches being taken to address these challenges and the long-term trajectory of the U.S.-China relationship.

China’s economic importance to Washington state cannot be overstated. In 2018, Washington exported $14.3 billion in goods there, including aircraft, medical devices, cherries and machinery. China is also a vital market for many of our state’s leading software, technology and professional-services firms, as well as a leading source of foreign students, tourism spending and investment.

Washington’s ports handled 15.5 million metric tons of cargo to and from China in 2018, although this was down from 25 million metric tons in 2017. More than a third of all containers handled in Washington arrive from or are heading to China. Our state’s global trade and supply chain management system directly employs nearly 100,000 workers in such fields as stevedoring, intermodal and transloading (transferring a shipment from one mode of transportation to another), warehousing, logistics and trade finance.

There are no true winners from a trade war, and Washington is a case in point. China’s retaliatory tariffs weaken the competitiveness of Washington products exported there, hurting our businesses, farmers and workers. Through the first half of 2019, products shipped from Washington subject to China’s retaliatory tariffs were down 31% year-over-year by value, while imported and exported cargo handled at our ports subject to tariffs from either side were down 22%.

Despite the dire state of our trade relationship with China, there is a constructive way forward.

• First, the U.S. and Chinese governments should immediately resume trade talks, and negotiators should come to a resolution on reducing barriers to trade and strengthen provisions that enable businesses to compete in a fair and transparent manner.

• Second, move forward with a positive, incentive-laden framework and set of milestones that effectively address the challenges at the core of trade tensions. The current administration’s approach has thus far been entirely punitive. However, Chinese leaders cannot, and will not, be viewed as capitulating to foreign demands.

Instead, we believe that solution-oriented approaches that establish a framework with the highest standards for trade and enforcement will provide a more constructive, long-term solution. An example of this is the Comprehensive and Progressive Agreement for Trans-Pacific Partnership, the 11-country trade pact that established universal rules of trade, including strong provisions on intellectual property protection and state-owned enterprises.

The administration’s decision to withdraw the U.S. from the predecessor TPP agreement not only deprived U.S. farmers, producers and consumers from the benefits of the agreement, but eliminated one of the strongest points of leverage for the U.S. and its Asia-Pacific partners to encourage China to step up its market opening and reforms.

• Third, the U.S. must leverage our allies more effectively. Multilateralism is a proven strategy for inducing positive behavior and providing constructive pressure on China. We can work with our allies to identify practices and rules of engagement we expect from China, and thus more effectively hold them accountable.

• Fourth, and most important, define what a successful trade deal looks like. Any subsequent negotiations and resulting Chinese behavior should be evaluated based on this measuring stick.

The relationship between the U.S. and China is, and will continue to be, the most important geopolitical relationship of the 21st century. The council and its members stand ready to support our Congressional delegates and other leaders as a resource and partner. The future health of this relationship matters significantly for Washington state businesses, communities and workers.

The Washington State China Relations Council is the nation’s leading statewide organization dedicated to promoting stronger commercial, educational and cultural engagement with China. The council’s members, comprising more than 100 companies, civic organizations and individuals in Washington state, believe that increased trade, economic cooperation and business activity will lead to greater prosperity in both countries and provide a platform to enhance mutual understanding between the two nations.