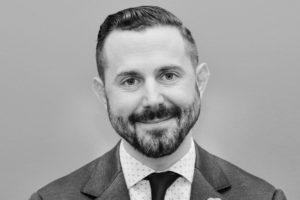 On February 21, 2019, Marc Berger, Vice President and Partner at Nyhus Communications was elected unanimously as the new chair at the WSCRC’s board of directors meeting. The Council greatly appreciated Andrew Wilson, former Chairman, for his leadership in the past two years.
Marc Berger is vice president and partner at Nyhus, a strategic communications and public affairs consultancy based in Seattle. Marc oversees executive communications and crisis management for the firm, supporting leaders and companies in a wide range of industries.

Marc has a rich background living in, studying, and engaging professionally with China. He supports Chinese companies looking to successfully expand their businesses in the U.S. market and American firms seeking greater connections with the People’s Republic. He previously worked at the National Committee on U.S.-China Relations, the nation’s foremost organization promoting constructive Sino-American relations, and received his master’s degree from Columbia University, where he focused on international relations, Chinese foreign policy and media.