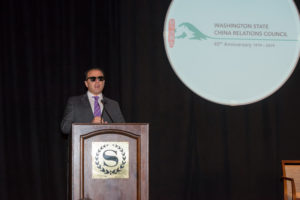 The Washington State China Relationship Council held its 40th Anniversary Gala on the evening of October 24th in the Sheraton Grand Hotel in Seattle. Over 300 people including many dignitaries participated in the event which paid tribute to the Council’s long history of working to improve relations between Washington State and China. The dinner opened with notes of congratulations offered by the Lt. Governor of Washington State, Cyrus Habib, Seattle Mayor Jenny Durkan and the Economic and Commercial Council of the People’s Republic of China, Yihang Yang.

Three of the five founders who created the Council in 1979 were in the audience and were recognized for their foresight in creating such an organization.  After a tribute to Sidney Rittenberg, a recently deceased Council member who worked with both Mao Zedong and later, U.S. companies opening operations in China. Nelson G. Dong, a former Council Chairman and well-recognized Seattle based lawyer was presented with the Sidney Award for Lifetime Achievement in improving relations between Washington and China.

Seattle Port Commissioner Courtney Gregoire addressed the 40 years of cooperation between the NW Seaport Alliance and COSCO Shipping and presented an award to Nong Ding, the Chairman of COSCO Shipping North America.

Former Ambassador to China Max Baucus spoke fondly of his time in Beijing in his keynote speech.  He explained how he came to understand how to effectively engage with senior members of the Chinese government, including Xi Jinping. Ambassador Baucus closed with his observations about the differences between the political systems between the U.S. and China and presented his ideas on how the U.S. must address its internal issues to remain a strong international power. 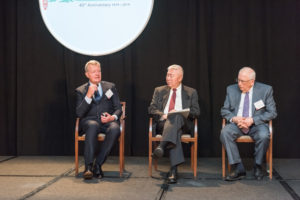 Following Senator Baucus, former Ambassador and Chinese Scholar Stapleton Roy provided his observations regarding Xi Jinping’s commitment to socialism and his view that China will eventually prevail in his struggle versus the U.S. The Ambassador closed by noting that the U.S. has no long-term strategy vis-à-vis China that puts the U.S. at a disadvantage.

The Council wishes to thank all those who have participated in this event.