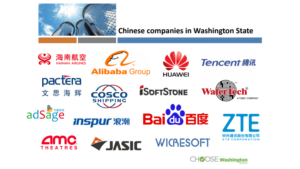 On January 29, 2018, the WSCRC launched the Corporate Executive Briefing Series, a new series of conversations which aims to provide a unique venue in which Washington business owners and executives can substantively increase their knowledge of commercial engagement with and in China.

With its “ravenous consumption culture,” intellectual property protection laws, and reputation for market certainty and consistency, the U.S. is the world’s most attractive consumer market and has the highest confidence index for FDI. Allison outlined the multifarious factors which give Washington an edge in the race to attract investment, which include a growth-oriented culture, an educated workforce, low-cost power, and a pro-business environment.  Additionally, Washington houses major clusters of technology industries while Seattle is increasingly a global hub for exports, boasting the West Coast’s fastest shipping lines to Asia.

Allison further discussed tactics employed by the Department of Commerce to foster interest in the region and confirm investment deals for Washington companies and enterprises. “From an economic standpoint, it’s a very good strategy to grow what you already have,” she pointed out, “cultivating inbound investment becomes an economic tool for us.” Allison’s team proactively locates leads on potential investment projects which could lead to job creation in the state, as evidenced in several recent cases where the department has facilitated closures on large foreign investments.

Entities represented at the Corporate Executive Briefing Series included the Washington Technology University, Old Republic Title, Port of Seattle, Greenfield Advisors, and Mercer Island Telecom, among others. Special thanks to K&L Gates for providing the venue for this event.