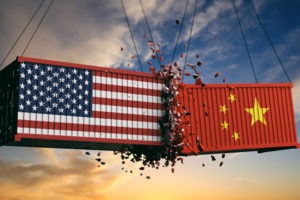 If left unchecked, the trade war between the U.S. and China has the potential for long-lasting damage to the Washington state economy. U.S. businesses have many legitimate grievances toward China, including intellectual property theft and industrial policies that seemingly disadvantage them in China. But the longer the dispute remains unresolved, the greater the risk to Washington’s historically prosperous trade relationship with China. Trade wars, as a general rule, yield no true winners. The collateral damage — in terms of lost overseas market share, aggravated supply chains, a reduction of cargo handled at our ports, reduced investment, and impacts to households in the form of higher costs — can be pernicious.

China is Washington’s most important export market. In 2018, after removing some pass-throughs such as soybeans, Washington state exported $14.3 billion in goods to China, of which $11.4 billion were aerospace products, defined largely by Boeing aircraft. Between 2011 and 2018, Washington cumulatively exported, in 2018 dollars, more than $106 billion in goods to China. The sales help drive economic growth across the state, bringing in new capital that is further spent throughout the economy.

Exports also aren’t just about aerospace. In 2018, Washington exported to China $364 million in ultrasound equipment, $70 million in wheat, and $68 million in cherries, as well as various other food, materials and machinery. Add to all of this the many billions of dollars in services exports, including software royalties, foreign student tuition and related expenses, tourism spending, and various professional services such as architecture design and engineering projects.

Many of the new tariffs have yet to fully materialize, according to the latest U.S. Customs data. Overall exports to China, adjusted for inflation, fell by just 1%. However, products subject to China’s list of 6,000 retaliatory tariffs experienced an inflation-adjusted 7% decrease year over year in 2018. Some of the biggest declines were in frozen potato products (23%), rough wood products (50%) and cherries (30%). There are many factors shaping export flows, but tariffs no doubt have a negative impact. Products included on China’s full retaliatory list support 29,000 jobs statewide, including direct employment and through multiplier effects.

Until recently, China has also been an important source of inbound investment, including foreign direct investment and household spending on real estate. Recent Chinese capital controls and tighter federal regulations on inbound investments have stymied the flow of this capital, and the impact has been profound and large.

Beyond exports originating from Washington, our state is a major Pacific gateway for the movement of millions of containers (measured in 20-foot equivalent units), plus bulk and break-bulk cargo between China and locations in the U.S. More than a third of all containerized cargo by weight handled in Washington state is from trade with China.

Handling these shipments supports an extensive logistics system in our state that includes thousands of jobs in stevedoring, trucking, warehousing, transloading, rail services and freight forwarding. At The Northwest Seaport Alliance, a partnership between the ports of Seattle and Tacoma, 60% of all inbound containers come from China, while 32% of outbound containers are headed there. Containerized cargo, primarily linked to China, in 2018 directly supported nearly 15,000 jobs in the greater Seattle area. There also are shipments to China of soybeans, grain, and other bulk commodities and breakbulk, the handling of which supports economic activity in our state. A prolonged trade war with China could mean fewer products shipped through our state, hurting this important source of job creation.

In 2018, Washington’s ports handled 15.5 million metric tons of cargo to or from China, down from 25 million just a year earlier. By value, imports and exports subject to U.S. and China tariff lists fell from $27.2 billion to $24.1 billion in 2018, though imports actually increased. Agriculture exports handled at Washington ports experienced the most acute pain from the trade war, such as soybeans from the Midwest shipped through Washington ports.

Washington’s close linkages with China make this region all the more vulnerable to an extended contraction of trade, impacting local businesses and communities across the state. For years, U.S.-China economic ties have helped mollify impulses for more aggressive agitation and flare-ups. A reduction in economic interdependence means less economic benefits are immediately at stake from a more strained relationship or even confrontation, a dangerous scenario for the world and Washington state’s economic well-being.

Spencer Cohen is a senior economist at Seattle-based research firm Community Attributes Inc. He can be reached at spencer@communityattributes.com.