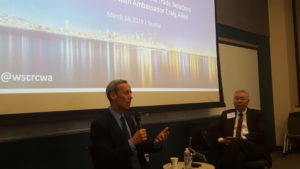 On March 14, 2019, Ambassador Craig Allen, President of the US-China Business Council and a former commercial diplomat to China, guided a lively interactive discussion on the current state and the future of the U.S.-China trade relations. He shared his expert insights on where the bilateral relationship is headed, including the dynamics at play in the ongoing negotiations, what to expect from the potential meeting between the two leaders in late-March, as well as the potential impact of reforms to export controls and investment restrictions to companies in the high-tech space. Amb. Allen argued that the current trade war would very likely morph into a technology war.