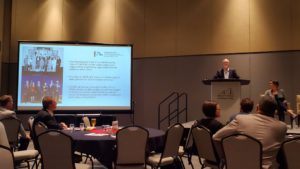 WSCRC’s Executive Director Nor Coquillard spoke at an event in Everett recently titled “Tariffs, Tension and Trade”. The event,  co-sponsored by the Economic Alliance of Snohomish County, Snohomish County, and WSCRC, brought together business and civic leaders from the region.  In addition to Nor, former Governor Gary Locke and well-known lawyer Nelson Dong of Dorsey and Whitney made presentations about the impacts of the continued trade war with China. Then they all participated in a panel discussion moderated by Everett Mayor Cassie Franklin. The audience was particularly interested in the repercussions of an extended trade war on the economy of Washington state.