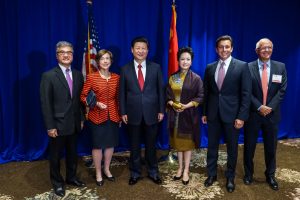 Chinese President Xi Jinping and his delegation departed from Paine Field Sept. 24 following two full days of meetings and announcements with many of Washington’s top business and government leaders. Gov. Jay Inslee, who led a trade delegation to China in 2013, invited President Xi to Washington because of the deep economic and cultural ties Washington shares with China. China is Washington’s state’s top trading partner with more than $29 billion of trade in 2014. Nearly one-quarter of all Washington exports go to China.

Washington state’s businesses, universities and research institutions were the focus of global news as President Xi, First Lady Peng Liyuan and dozens of Chinese governors, mayors and ministerial officials made stops throughout the Puget Sound region and signed business deals and partnership agreements.

“President Xi’s visit gave us a rare opportunity to truly showcase Washington state as a world-class center of innovation,” Inslee said. “Our universities, businesses and research institutions are on the leading edge of everything from technology and airplanes to vaccines and cures for cancer. President Xi’s visit will help strengthen ties with our Chinese partners and open doors for new partnerships around the world.”

President Xi gave his only policy speech of his U.S. trip at a dinner banquet in Seattle where dignitaries such as former Secretary of State Henry Kissinger were in attendance. The president’s speech covered multiple topics including economic reforms, international relations and cybersecurity.

Other highlights of President Xi’s visit to Washington state:

• The Paulson Institute co-hosted a U.S.-China Business Roundtable with 15 U.S. CEOs and 15 Chinese CEOs, at which the business leaders discussed issues, challenges and opportunities facing the two countries and explored ways to collaborate and strengthen the U.S.-China economic relationship. President Xi delivered remarks, noting that China is working to bolster its economy, advance reforms and strengthen business ties with the United States. Paulson Institute Chairman Henry M. Paulson, Jr., moderated a discussion with the business leaders, stressing the need for both countries to work together to sustain global economic growth and address global problems, such as cyber-theft and climate change.

• Microsoft hosted President Xi, First Lady Peng Liyuan and a high-level Chinese delegation Wednesday at its Redmond campus, where the company highlighted new technology and the role technology can play in advancing health, education and business. During his visit to Microsoft, Xi met with senior executives and board members, watched technology demos and reviewed innovative new devices. Xi met briefly with CEOs of technology companies who attended a meeting of the U.S.-China Internet Industry Forum earlier in the day. He also met privately with Bill and Melinda Gates.

• President Xi visited Boeing’s factory in Everett for a tour of the company’s widebody commercial airplane factory. Several agreements were announced including orders and commitments for 300 Boeing aircraft and expanded collaboration between Boeing and China’s commercial aviation industry.

• President Xi’s final public stop was at Lincoln High School in Tacoma where he met with members of the Lincoln High School football team who presented him with a Lincoln Abe’s game jersey. The president also met with about 30 students in Lincoln’s Advanced Placement Government course taught by recently crowned Washington State Teacher of the Year Nathan Gibbs-Bowling. Gibbs-Bowling went to Fuzhou, China, as part of a teacher exchange program last year. During the auditorium presentation, President Xi shocked the audience with a generous invitation for 100 Lincoln High School students to visit him in China next year.

“We will look back on these two days as a major milestone in relations between our two great countries, with Washington state once again playing a central role in fostering positive ties,” said Kristi Heim, Executive Director of the Washington State China Relations Council. “This visit has shown our genuine goodwill and brought people from China and Washington state closer together to work for common good.”

Among the numerous agreements signed between Chinese delegates and Washington leaders was one by Inslee, five other U.S. governors and six Chinese governors and leaders to advance economic development opportunities related to renewable and clean energy technology. The Governors’ Clean Energy and Economic Development Accord establishes an agreement to collaborate on commercialization and deployment of clean and renewable energy technologies, promote energy efficiency, advance smart grid infrastructure, reduce transportation emissions, and improve air quality.

Washington state became the sixth sub-national government to sign an MOU for a Joint Working Group for Trade and Investment Cooperation between U.S. States and China Provinces. The Department of Commerce will lead the state’s participation in the working group with the provinces of Guangdong, Sichuan, Shaanxi, Hunan, Liaoning, Shanghai.

The Washington State Department of Commerce also put together an agreement between the state, the Chinese Academy of Sciences, Intellectual Ventures and Stratos Group to explore collaboration between a Seattle technology incubator center and the Shenzhen Institutes of Advanced Technology, manufacturing and life sciences. Bonlender initiated the agreement on an earlier trade mission to China and signed it several weeks ago in China in preparation for President Xi’s visit this week.

• The State of Washington, together with the Chinese Academy of Sciences, Intellectual Ventures and Stratos Group, signed an MOU to explore collaboration between a Seattle technology incubator center and the Shenzhen Institutes of Advanced Technology.

• Commerce Director Brian Bonlender also signed an agreement between Guangdong and Washington State on opportunities in clean energy, advanced manufacturing and life sciences. The agreement was initiated on an earlier trade mission to China and signed it several weeks ago in China in preparation for President Xi’s visit this week.

• TerraPower and China National Nuclear Corporation signed an MOU to collaborate on development and commercialization of a next generation nuclear power plant technology that builds on the joint announcement made Presidents Obama and Xi last November in Beijing. TerraPower Chairman Bill Gates was one of several witnesses on hand for the signing.

• Northwest Innovation Works, which recently signed a construction agreement at the Port of Kalama to build a cutting-edge new methanol manufacturing facility, signed several commercial agreements with Chinese businesses related to the project.

• Industrial and Commercial Bank of China (ICBC) and Washington State signed an MOU at the commemoration of opening of ICBC’s Seattle office. Washington State is now a preferred destination for foreign direct investment from China, and the MOU will aid the Washington State Department of Commerce in recruiting the overseas headquarters of Chinese companies.

“Governor Inslee and the Welcoming Committee worked very hard to secure the visit by President Xi,” said Commerce Director Bonlender. “We used this opportunity to maximize the state’s exposure, bring businesses together, and ink deals and agreements that can have a meaningful impact on the lives of Washingtonians. In the end, we are happy with what we were able to accomplish.”