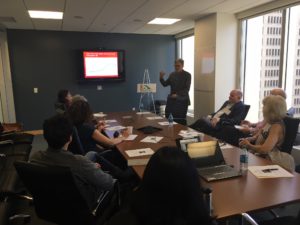 On May 14, 2018, WSCRC welcomed Dr. Victor Shih to this year’s fourth installment of the Policy Briefing Series. Shih is an associate professor of political economy at the University of California, San Diego School of Global Policy and Strategy. Following up on his November 2017 briefing which assessed outcomes of China’s 19th Party Congress, Dr. Shih provided insight into implications of President Xi Jinping’s consolidation of power.

In March 2018, China’s state constitution was officially amended, making it illegal for Xi to be voted out of office. “Everything points to Xi serving for life,” Shih explained, and with many of Xi’s Zhejiang “clique” being promoted to the Politburo, Xi will “dominate the Politburo Standing Committee in the near future,” with a few more key promotions.

Though Xi initially lost followers subsequent to the anti-corruption campaigns of his first term, the outcomes of the 19th Party Congress proved that his shrewd strategic planning and positioning were ultimately successful. “Xi has been able to concentrate a lot of power in his hands,” Shih continued. This consolidation of power is demonstrated clearly in the immense restructuring of the central government’s ministerial system into a series of CCP commissions which will assert greater control over every policy area at the central, provincial, and local levels and most of which are helmed by Xi himself.

Xi’s tremendous consolidation of power also carries implications for the current US-China trade dispute. “Because of Xi’s almost limitless power,” Shih elucidated, “he has great latitude to negotiate. To the extent that they do not fundamentally undermine the ‘China Dream,’ Xi will happily make concessions.” In Shih’s view, President Trump’s resent statement regarding the softening of penalties on Chinese tech company ZTE is likely a signal to China that the US is still open to negotiation. Likewise, Shih foresees that Xi will find peaceful and harmless ways to reduce the trade deficit while avoiding concessions on real sticking points such as tech transfer policy, leaving these critical questions unresolved.