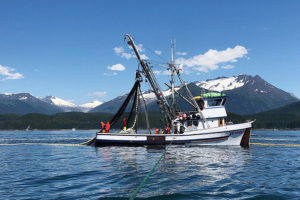 As President Donald Trump announced new tariffs on China last week in a trade war with no end in sight, American salmon fisherman Sven Stroosma set his sights on the blue waters of the Gulf of Alaska, piloting his boat Voyager in search of a big salmon catch.

Alaskan salmon are running, and Pacific Northwest fishermen like Mr. Stroosma have only a few intense weeks in July and August to catch enough to sustain their family income for the coming year. Rough seas, equipment failures, and dry streams that limit spawning all threaten to hurt their haul.

This season, the U.S.-China trade conflict has increased pressure on salmon fishermen by depressing the price offered for their hard-earned catch. China, the biggest importer of Alaska seafood, included the industry in a 25% tariff increase imposed last year.

Mr. Stroosma, who has fished salmon for 35 years, says he is being offered only 30 cents a pound for pink salmon this year, compared with 45 cents last year. Chum salmon dropped from 90 cents to 50 cents over the same time period, he says.

“I know the government feels that … China has unfair trade practices with us so we’re playing hardball with them,” Mr. Stroosma says in a call from aboard Voyager, his 58-foot purse seine boat, during a refueling stop. “But this is a small sector of the economy that is being affected pretty seriously.”

The Pacific Northwest and many of its key industries are being hit hard as the U.S.-China trade conflict worsens, raising questions about what localities and businesses can do to defend their economic interests against policies coming from Washington, D.C. With new tariffs in the offing and China no longer the top U.S. trade partner, according to data released last week, groups and officials in areas that rely heavily on the trade relationship with China are speaking out against the economic decoupling.

“We need to get the message inside the Beltway that we are hurting out here and these tariffs are the reason,” says J. Norwell Coquillard, executive director of the Washington State China Relations Council. While he and others agree China should be challenged for its unfair trade practices, including limits on market access and the lack of intellectual property protections, he disagrees with the Trump administration’s tariff strategy. With more than 100 corporate and other members including Boeing, Microsoft, and Starbucks, the council issued a statement in July strongly urging both sides to “find common ground quickly” and move to expand and strengthen U.S.-China trade.

No end in sight
Washington, Alaska, and Oregon are among the top seven states most affected by China’s tariffs, based on a percentage of gross domestic product. U.S. industries most heavily impacted, as measured by total employment, include aircraft manufacturing and fruit farming, according to research by Deutsche Bank. Governors, mayors, and other local leaders are taking the initiative to keep doors open with China for the long term, while lawmakers are lobbying for relief packages.

Washington is the most trade-dependent state in the country, with about 40% of all jobs linked to international commerce, and historically it has been the state with the most trade by value with China, according to a June report by the Seattle-based Washington Council on International Trade. China is Washington’s largest trade partner, with $32.4 billion in two-way trade including $16 billion of exports and $16.4 billion of imports, the report says.

Chinese tariffs will directly or indirectly affect an estimated 28,700 jobs, $1.7 billion in labor income, and $6 billion in business revenue in Washington state, according to a May report by Community Attributes Inc. (CAI), a Seattle-based economic research firm.

Apart from salmon fishermen, Washington’s cherry, apple, and wheat farmers have been hit by the tariffs, allowing producers in other countries to make inroads in China, says Mr. Coquillard. “All these things are devastating to our businesses here.”

The negative impact on Washington’s economy comes not only from falling exports to China, but also the reduction of cargo flows to Pacific ports. The value of cargo subject to tariff increases passing through Washington ports fell from $27 billion in 2017 to $24 billion in 2018, according to the CAI report.

“There are a lot of longshoremen and tugboats and a lot of work done to get those [exports] to China, and we all lose out if that disappears,” Mr. Coquillard says.

Despite such concerns, the U.S. and China appear locked in the trade conflict that experts say is unlikely to end soon. Mr. Trump announced Aug. 1 that the U.S. will impose a 10% tariff on another $300 billion of Chinese imports, starting Sept. 1. On Monday, Beijing appeared to retaliate by allowing its currency to weaken – and the Trump administration promptly designated the country a “currency manipulator.”

China experts doubt Beijing will bow to Mr. Trump’s pressure tactics, but say Washington is also unlikely to back down. “Prosecuting the trade war is a political winner for [Mr. Trump], so for reasons of substance and politics it will be very difficult to move this administration off its current trajectory,” says Scott Kennedy, who directs the Project on Chinese Business & Political Economy at the Center for Strategic & International Studies in Washington, D.C.

Mixed view on “bailouts”
Businesses damaged by the trade spat can move production or investments to avoid tariffs, increase efficiency to absorb added costs, and apply for tariff exemptions. Indeed, “individual company announcements and aggregate trade and investment flows show companies are far into their adjusting to the trade war,” Mr. Kennedy says.

Still, some small-business owners, including salmon fishermen, have limited choices.

“It’s not like they can switch to other species that are not subject to the tariff or have markets beyond China,” said Robert Kehoe, executive director of the Purse Seine Vessel Owners’ Association, a Seattle-based nonprofit organization with nearly 300 members – most of them salmon fishermen – located along the West coast and throughout Alaska. “They don’t have any good options, other than just to keep fishing and get less money for their product.”

Mr. Stroosma and his deckhands – two sons, a nephew, and a friend – use Voyager and a small aluminum skiff to set the large weighted seine, or net, which hangs 100 feet deep in the ocean. They then tighten a purse line at the bottom of the seine to trap schools of salmon and haul them on board with a mechanized winch called a power block. It’s dangerous and demanding work.

“Right now, everybody hopes to be on their A game and be as productive as possible,” says Mr. Stroosma. “When the fish stop running it is like a faucet just turned off. … If you didn’t get what you needed to get or you broke down during the peak times, that can be disastrous for your season.”

By shrinking already narrow price margins, the Chinese tariffs are threatening to push some salmon fishers out of business.

“A lot of people fish year-round to keep the house payments made and the boat payments made,” says Mr. Stroosma, who lives north of Seattle in Mount Vernon. “There are definitely a lot of people struggling right now to make ends meet.”

Lawmakers from Alaska, Washington, and Oregon have lobbied the Trump administration to provide relief for the fishing industry, as it has for farmers, after Mr. Trump announced in May as much as $16 billion in aid for domestic agriculture impacted by China’s tariffs.

“China’s retaliatory actions are taking a heavy toll on Alaska seafood and the consequences … are getting worse,” Alaska’s congressional delegation wrote in a June letter to the U.S. agriculture secretary, saying it is not sustainable for fishermen to continue to absorb the costs. “The Alaska seafood industry cannot effectively compete in the Chinese domestic market” and is losing its edge to Russia and other competitors, the letter says.

In another initiative by lawmakers, Oregon Sen. Ron Wyden and Massachusetts Rep. Seth Moulton introduced legislation in June that seeks to amend the law on disaster relief for fisheries to include harm from tariffs.

Mr. Stroosma has mixed feelings about any government relief.

“Fishermen – probably very similarly to farmers – we are very independent,” says Mr. Stroosma, who first fell in love with salmon fishing when he joined a crew one summer as a 19-year-old University of Washington student to help pay for college. “We don’t like to rely on government bailouts.”

Most important, though, is the strength of U.S. fisheries and the fleet as a food producer. “We are not looking for handouts,” he says, “but if that is what we need to stay viable and make it through this trade problem – it might not be a bad idea.”