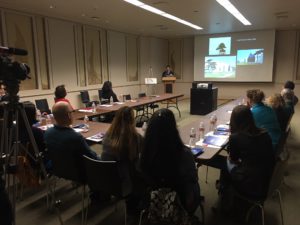 Mr. Gui shared observations of trends in China’s contemporary art movement in terms of commerciality, government sponsorship, and global recognition. The institutional changes of the last decades combined with the ambition of contemporary artists in China has created a modern artistic phenomenon, which Mr. Gui is passionate about understanding and promoting.

A brief history of the Chinese contemporary art movement reveals that official government sponsorship marked a significant turning point in the direction of the movement. “Historically contemporary art was counter-cultural, counter-political and considered ‘experimental’ by the government, but the Shanghai Biennale was historic because it marked the government’s official support of the movement,” Gui explained.

Since that time, the Chinese government has contributed to defining the contemporary art culture, and China’s top art academies have received not only increased government attention, but also a deluge of applications from young artistic hopefuls to whom a career in the arts become a viable and respectable option. Collaborations between entrepreneurs, collectors, architects and artists have been another driving force in the creativity displayed in modern museums, art fairs and exhibitions.

Interest in contemporary Chinese art has skyrocketed in the past decades, as evidenced by the establishment of as many as 386 art museums in one year, many of which are located in second-tier and even remote locations. Similarly, specially designated art districts in major cities are attracting foreign tourists as well as nationals. Pre-1990 Beijing could boast not a single professional art gallery, but now more than 300 can be found in the art district alone.

Gui believes that the Magiciens de la Terre exhibition in 1989 Beijing was pivotal in initiating an East-West dialogue that has continued to flourish to the present day. The first Chinese contemporary art auction at Christie’s in 1998 again increased international interest. Since then, contemporary Chinese artists have been featured prominently in many of the world’s most distinguished venues, and Chinese auction houses rank the third and fourth largest in the world in terms of revenue.

Special thanks to NanHai Art and SAM’s Gardner Center for Asian Art and Ideas for co-hosting this seminar.