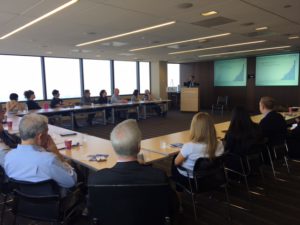 On August 10, 2017, the Washington State China Relations Council convened the fifth session of its Policy Briefing Series with a compelling presentation from Daniel H. Rosen of the Rhodium Group. An expert on US-China economic and commercial relations, Mr. Rosen tailored his analysis of Chinese Foreign Direct Investment (FDI) in the US to Washington State, offering valuable insights into the historic and potential future roles of Washington in the US-China investment dialogue.

China’s outbound investment saw a 300% increase from 2015 to 2016, causing some to speculate with concern that China’s investment levels are on the verge of plateau or decrease. To the contrary, Mr. Rosen explained the China is just reaching globally competitive, “normal” levels. Direct investment to the US also surpassed investment in the EU in 2016 and, a trend which may be expected to continue.

Chinese investment trends are unique in that they are extremely diverse both economically and geographically. Companies and investors are closing on record numbers of merger and acquisition transactions in every sector of the economy, while greenfield enterprises have similarly jumped to comprise non-negligible levels of total investment. This makes Washington an appealing candidate for investment in yet another regard: many Washington industries match up perfectly with where foreign interest is strongest.

“You’ve got a brilliant mix of stuff here in the traditional industries that make up the Washington State economy,” Dan observed, “the question is the pitch… the demonstration that you are thinking about the solutions to the arising problems.”

Mr. Rosen was frank in his analysis of Washington State’s position in regard to its relationship with China. A longstanding history of outreach and an enviable record of goodwill once put Washington State one step ahead of the rest of the country, however those historical realities cannot be taken for granted. It is essential that a clear narrative of the state’s assets for attracting FDI be developed. He envisions a Washington that points the way forward as a model to other states for developing progressive, secure, and mutually beneficial investment ties with China.

An engaging Q&A session was facilitated by Sean Connell, Chair of the WSCRC Government Affairs Committee.