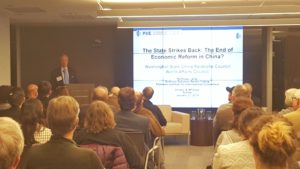 On January 23, 2019, Dr. Nicholas Lardy, the Anthony M. Solomon Senior Fellow at the Peterson Institute for International Economics and a renowned expert on the Chinese economy, presented to a large crowd at the Dorsey and Whitney about his new book, The State Strikes Back: the End of the Economic Reform. Dr. Lardy argued that China’s recent slowing economic growth is not the result of the natural maturing of an economy, but rather may reflect the diminished pace of economic form and the resurgence of the state in resource allocation since President Xi Jinping assumed power in 2012. His talk highlighted numerous examples of the growing tilt towards the state sector, such as the delinking of credit allocation with differences between state and private sector firm rates of return on assets and the impacts of enterprise subsidies.