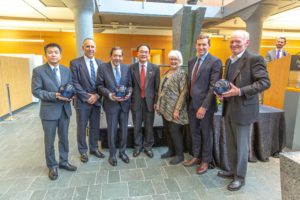 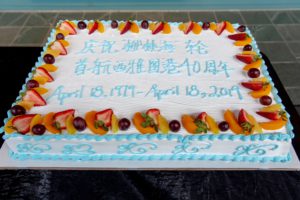 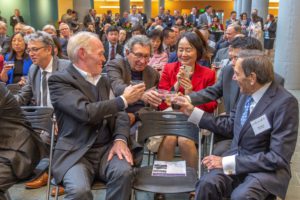 On April 18, 2019, the WSCRC, in partnership with the Ports of Seattle and Tacoma, the Northwest Seaport Alliance and Garvey Schubert Barer hosted the 40th anniversary celebration of the arrival of the Liu Lin Hai in Seattle. The reception event commemorated the resumption of direct shipping relations between the People’s Republic of China and the United States that took place on April 18, 1979, with the docking of M.V. Liu Lin Hai at the Port of Seattle, following a three-decade hiatus. It also honored Stan Barer, founding member of the WSCRC and name partner of GSB, for his role and extraordinary contributions to U.S.-China relations during the past 40 years. Speakers at the event include Consul General Wang Donghua from the San Francisco Consulate, Port of Seattle Commission Ryan Calkins, Port of Tacoma Commissioner Clare Petrich, President of COSCO North America Feng Bo, CEO at SSA Marie Knud Stubkjaer and CEO of Northwest Seaport Alliance John Wolfe.